We’re all guilty of throwing food away.

Yet, as the majority of people, you struggle to admit it.

Kwik Sweep, London’s favourite waste collection and rubbish removal company, wants you to change your mind. So, have a read!

Wrap, a sustainability charity, claims that efforts to reduce edible waste have, so far, done “nothing” to reduce the estimated 10 million tonnes of food that we have been binning, EVERY YEAR, since 2012.

In case you did not know it, that roughly corresponds to enough loaves of bread to fill Wembley Stadium, enough milk to fill 230 Olympic-sized swimming pools, and the weight of 365 blue whales in bananas, ALONE.

However, all hope is not lost, yet. 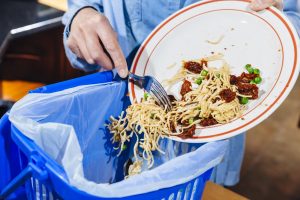 Close-up of a woman sweeping the leftovers from a meal into a blue garbage bin. AdobeRGB colorspace.

Here are some of the people we, at Kwik Sweep, think are doing a great job when it comes to reducing food waste.

Jamie Crummie and his best friend Chris are the founders of “Too Good To Go,” an app that enables users across the country to purchase cut-price meals at the very end of trading time.

Matt McLaren, Joe Halstead, Miha Pipan, and Fotis Fotiadis are beating food waste with insects. Yes, you read that right. The larvae of their chosen insect have great appetite for food waste, and turn this into useful fats and proteins. In turn, these larvae can be used as nutrient-rich, cheap food on salmon farms.

Guy Singh-Watson, the head of Riverford Organic Farmers, has cut ties with supermarkets to slash his waste from an estimated 50 per cent to just 2 per cent. His greens business even provides leftovers to restaurants, cafes, and canteens for free, and gives employees as much surplus as they want.

See, fighting food waste is not that hard, after all.

… and neither is fighting all other kinds of waste.

In fact, that is exactly what Kwik Sweep does. Our waste collection and junk removal services are unbeatable in London.

So, if you need help with you waste, Kwik Sweep can help you