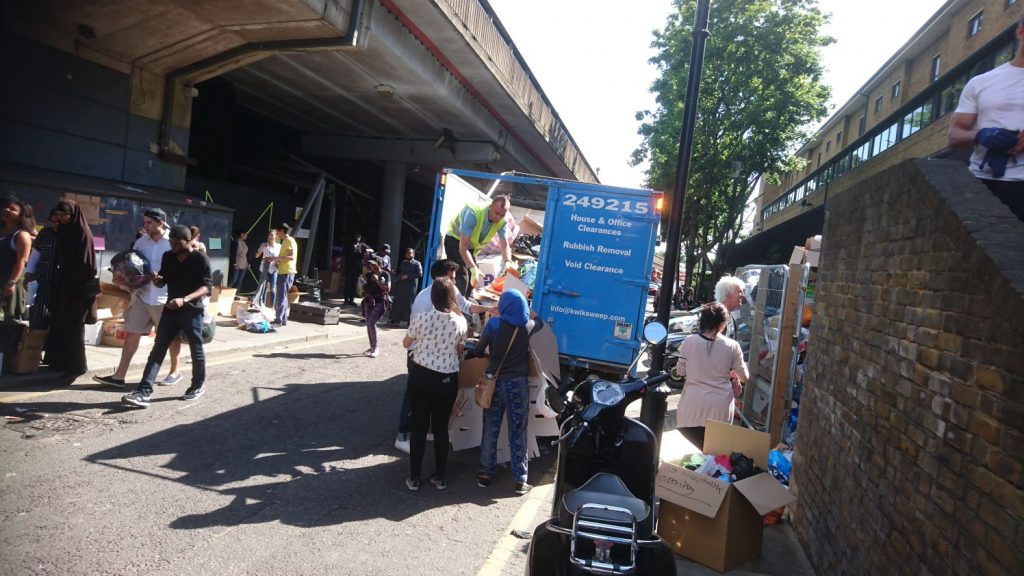 Hours after the tragedy, people from “as far afield as Birmingham” poured into West London to help residents with aid operations (The Guardian, 17th of June 2017). Carrying “flowers and supplies,” they joined locals providing help, amid “complaints that the local authority … [was] failing to coordinate operations” (The Guardian, 17th of June 2017).

So far, the victims of the fire have received record numbers of donations. These have spurred controversy.

The lack of direction has caused an abundance of “unwanted” donations, too.

In specific, surplus unwanted items have piled up below the Westway flyover. These, due to their volume, risk obstructing the work of the authorities in the area. Residents, as well as the emergency services, have both expressed their disappointment with the state of the area surrounding the flyover.

In response to such chaos, KwikSweep has offered its help.

Forty-eight hours after the fire, the London-based waste disposal service was already in the area to help the authorities cope with the aftermath of the fire. Working with the Westway Development Trust, KwikSweep has collected “unwanted” donations, making the area around the Westway flyover clean, tidy, and accessible to all.

KwikSweep has thus guaranteed the disposal of surplus goods in as much an environmental way as possible.

In the face of disaster, KwikSweep has worked in and with its community to minimise waste to landfill and maximise waste recycling.

This is what we commit ourselves to. Everyday.