We really did mean to write that.

Some tiny, single-cell organisms discovered living underground could help us solve the problem of nuclear waste disposal, say scientists at the University of Manchester.

Kwik Sweep, whose expertise lies in waste collection and removal in London, is here to shine some light on this news.

Bacteria with waste-eating properties are not a novelty. Some had already been discovered in relatively pristine soils before. However, this is the very first time that microbes with waste-eating abilities are found living in radioactive waste disposal sites.

The University of Manchester, while working on soil samples from a radioactive, industrial site in the Peak District, has discovered specialist “extremophile” bacteria that thrive in the extremely toxic conditions expected in cement-based radioactive waste. 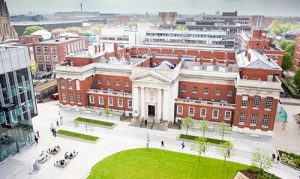 But that is not all.

These organisms are not only able and adapted to live in highly alkaline lime wastes, but they can even use radioactive acids as a source of food and energy.

Here’s what they do.

When there is no oxygen available to them, these organisms break down radioactive acids to “breathe,” switching their metabolism to breathe using other chemicals, such as nitrate or iron.

At present, this fascinating process is being studied by scientists at the university of Manchester. The aim of their work is to improve our knowledge and understanding of the safe disposal of radioactive waste underground by analysing the unusual diet of these bacteria.

Professor Jonathan Lloyd, one of the researches involved in this inquiry, said: “We are very interested in these Peak District microorganisms. Given they must have evolved to thrive at the highly alkaline lime-kiln site in only a few decades, it is highly likely that similar bacteria will behave in the same way and adapt to living off acids and around buried cement-based nuclear waste quite quickly.”

There is still a lot of work that needs to be done on these bacteria, but their role may be fundamental in the future fight on waste.

In the meantime, Kwik Sweep continues to offer waste removal and collection services across London, specialising also in WEEE, asbestos, and waste.

So, if you require help in getting rid of your waste, get in touch with us!