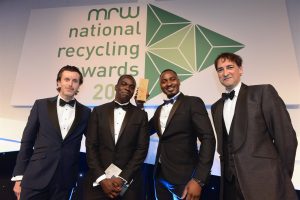 The team is excited to announce it has won two categories at this year’s prestigious National Recycling Awards!

KwikSweep has topped competition from a host of industry leaders, and has taken home awards for best “Communications” and “Waste Prevention” in the private sector. With these awards, KwikSweep has come out on top of industry giants Costa Coffee and Canary Wharf Management.

On the night, the judges have praised KwikSweep as “a small company that has invested a significant amount relative to its size with tangible results.” Its new App, as Material Recycling World reports, provides a completely new system of communication for the business, which offers customers convenience, knowledge, and value for money.

Within six months of its launch, the App has seen a 20% month-on-month increase in its number of users. On top, there has also been a 15% decrease in calls and emails to the KwikSweep team, with this traffic being replaced by direct App communication.

To the judges, the App’s success is the result of its “very clean and simple design,” which “has obviously considered its market and tailored it accordingly.” The App streamlines KwikSweep’s existing practices, eliminating superfluous paperwork and logistical arrangements. The result is cost savings that benefit both the company and its customers.

KwikSweep’s App enables users to deal with waste in a quick and cheap manner. The judges themselves were “impressed with the potential for furthering waste avoidance” intrinsic to the company’s App. This is why they presented KwikSweep the award for Waste Prevention.

Our company’s system is unique, in that it transforms what was previously a lengthy, inefficient process of paperwork into a process that is no more complex than the tap of a button.

KwikSweep’s disposal process ensures that waste is carefully sorted, with salvageable and reusable items being offered to charities or local trade when possible. The company is “aggressive on waste for a sustainable future,” and aims to recycle and reuse as much as possible.

These awards are the first step in developing KwikSweep’s future. Our company seeks to increase its App user base, and hopes to extend its communication reach outside of London in the near future.

For the time being, we are proud of what we have achieved so far, and we look forward to our future successes!

To down;load the app search “Kwiksweep” id your IOS or Google Play Store